skip to main | skip to sidebar

The Portland Branch of the Women's Overseas Service League Organized 1922, With Eleanor Ewing, R.N. as President

Women who served overseas in the First World War from Portland, including the women of Base Hospital 46, were eligible to join the new Portland Branch of the Women's Overseas Service League, organized on April 17, 1922.

The first president of the League was Base Hospital 46 nurse Eleanor Ewing.

According to the files in the Grace Phelps Papers at the Historical Collections & Archives, Oregon Health & Science University, Ewing was born in 1891 and graduated from Portland's Good Samaritan Hospital Training School for Nurses in 1914. She worked as a radiographer at the Portland X-Ray Laboratory before her Base Hospital 46 service. Ewing married physician and First World War veteran Ralph Sharkey in October 1922 and the couple lived in Portland. She died in Portland after having three children in March, 1929 ("Society," Oregonian, October 8, 1922, Sec. 3:2 and obituary for March 1, 1929 in Grace Phelps files.)


Posted by Kimberly Jensen at 6:00 AM

Grace Phelps and Women Veterans: Some Men Were Nervous About an All Female Veteran Organization in Portland


Grace Phelps, who had served as chief nurse of Base Hospital 46 in France and then in the same capacity for Base Hospital 81 after the close of the war, was a leader of women veterans in Portland.

In 1921, women organized a national Women's Overseas Service League to fulfill this need. Portland women, led by Grace Phelps, took steps to organize a local branch in the spring of 1922. 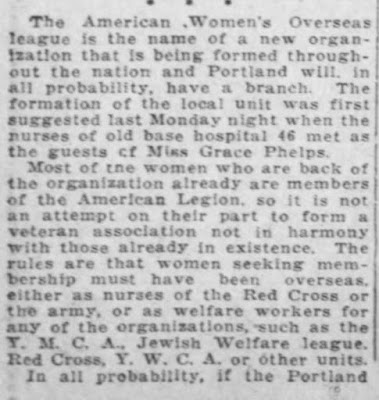 In an Oregonian column dedicated to veteran affairs titled "The Citizen Veteran" for February 12, 1922, we learn that Base Hospital 46 nurses met in Portland that month "as the guests of Miss Grace Phelps" and at that meeting they talked about forming a Portland branch of the Women's Overseas Service League (WOSL), which would also include women from voluntary branches.

The column suggests that there were tensions and opposition from some male veterans about the formation of an all female  group. "Most of the women who are back of the organization already are members of the American Legion, so it is not an attempt on their part to form a veteran organization not in harmony with those already in existence." Local American Legion leaders "declared that the clubrooms [of the Legion] should be thrown open to the women for their meetings."

Grace Phelps addressed the opposition head on:  "We are not attempting to break away from the American Legion," she insisted. "With the nurses and other women war workers in an organization of their own we will probably be able to render valuable assistance to the legion."

The column listed those "aiding Miss Phelps in plans for the local organization" as Miss Jane Doyle, Miss Marjorie MacEwan, Miss Ann Steward and Mrs. Merle Campbell. More on these plans in the next posts.


Posted by Kimberly Jensen at 9:21 AM

Base Hospital 46 Nurse Stasia Walsh, R. N., worked with the Red Cross in Serbia for four years after World War I. Her 1920 passport application provides some interesting clues about her status and service.

Walsh was an Irish national when she immigrated to the United States and studied nursing in Iowa and worked as a private duty nurse in Pendleton, Oregon. She served with Base Hospital 46 as an Irish citizen. And when the Red Cross called her for postwar duty in East Europe in early 1920 she became a naturalized U.S. citizen.

The first page of Walsh's 1920 passport application tells us that she became a naturalized U.S. citizen in Pendleton, Oregon on January 10, 1920. Her application was dated February 13, 1920. Nurses who served with the U.S. Army Nurse Corps during the war had to either be a citizen or "must before appointment make a declaration to become such, and, if she wishes to continue in the Nurse Corps must at the proper time take our final naturalization papers." (Stimson, Army Nurse Corps, 288). I'm trying to find out what the American Red Cross required for citizenship of its workers in the aftermath of World War I or whether this was Walsh's choice. The timing coincides with her application for and assignment to nursing in Poland and Serbia. Her passport application indicates that Walsh was still in the planning stages for her new employment -- she had not made her travel reservations (or the Red Cross had not yet made them for her). She also evidently hoped to travel back to her home in Ireland and to other European nations in addition to her work in Poland.

The second page of Walsh's passport application suggests that she was in a hurry -- instead of having the passport mailed to her in Pendleton she indicated that she would call for it, perhaps in Portland.

The Women's Overseas Service League bulletin Carry On, announced in February 1925 that Walsh had recently returned from four years of Red Cross service in Serbia. She was going to marry T. G. Dunn in March 1920 and would move with him to St. Anthony, Iowa. Marriage license records indicate that he was a 44 year old farmer. I would love to hear from Iowans or others who know more about her journey after her marriage.
Posted by Kimberly Jensen at 8:33 AM

Stasia Walsh, R.N. who served on the nursing staff of Oregon's Base Hospital 46 in France during the First World War, returned to Umatilla to work with the Red Cross and identified as a veteran with the American Legion and Women's Overseas Service League. In February 1920 she received an assignment to go to Eastern Europe for service with the Red Cross in the aftermath of war, revolution, and refugee crises.

During the war, as we've seen, newspapers reprinted letters home from local women and men in service. And newspaper editors continued the practice as local residents continued overseas service. On May 1, 1920, the Pendleton East Oregonian reprinted a letter from Stasia Walsh that her "Pendleton friends" shared with the paper. Walsh reported that she was in Belgrade "placed in charge of a clinic for Serbian children and examines from 55 yo 80 children each day." The clinic brought a foreign aid worker like Walsh together with a young Serbian woman with little English and a Serbian who spoke only Serbian and a "Bulgarian prisoner of war" to administer the clinic for the children. Belgrade was a "queer mixture of East and West."

The Pendleton paper printed parts of another letter from Walsh, this one to Mrs. M. J Cronin, in December 1920. Walsh wrote that after she left Serbia she went to her native Ireland for two weeks. The country was in the midst of a war for independence with fierce fighting. Without giving specifics she felt that "it is a very sad country now. I hope that things will be brighter for them later on."

Walsh was now in Red Cross service in Poland, again an independent country after World War I but where there was still conflict on its borders. Walsh gave information about where to send mail and information about her travels. And she gave a brief but informative description of her living quarters in the city of Kracow. "There is an immense castle just across the street from us. We are living in an old monastery. It is a find bring building but cold as a barn and no coal to heat it. We have one room with a storve and we sit there and write, and so forth, during the day."

Walsh's letter also reported on local and US women whom she had see and met in her travels to Paris, Belgrade, and Kracow. Several women were from California "and the western states" and "a number of them have been to the Pendleton Round-Up." Pendleton was becoming famous for its early fall Round-Up, ten years old in 1920. It became one common touchstone for Americans abroad who had visited Pendleton's attraction and a point of pride for Pendletonians abroad and at home.

Walsh also told her friend that she had seen Eglantine Moussu "in Paris several times." Moussu was a Pendleton woman who had served in the Signal Corps during the war. Walsh's letter suggests the importance of networking among those Oregonians and Pendletonians serving abroad.

Posted by Kimberly Jensen at 6:00 AM

As we saw in the last post, Base Hospital 46 nurse Stasia Walsh returned to Umatilla, Oregon after her wartime service and became involved in Red Cross community work, teaching classes in public health and home hygiene and helping victims of influenza.

She also identified herself as a veteran, a complicated thing for a woman following World War I.

The Pendleton East Oregonian featured a brief account titled "T[w]o Veterans Meet" in October 1919 that presented Walsh as a veteran of the war.

In the account, Walsh met Meyer Newman "on the Pendleton streets" and they greeted one another with their nicknames from Base Hospital 46, she was "Pat" and he "Horse." Otis Wight's On Active Service with Base Hospital 46 lists Newman, from Corvallis, as a private serving as a guard in the Detachment Office and also the coach of the unit's football team. The newspaper account suggests that they were comrades in a powerful time "when the two served in the Base Hospital 46 days in the days when the fighting was hottest during the world war." They had also found a way to return to life in the States, he as high school athletic director at The Dalles and she in public health nursing in Umatilla County.


In January 1920 the East Oregonian noted that Walsh had decided to join the veteran group the American Legion as the only woman member of the Pendleton post. We don't have a record of her thoughts on this, but she did choose to join the primarily male American Legion during her time in Umatilla county. When women who served overseas in the First World War created a parallel organization, the Women's Overseas Service League, Walsh joined the Oregon branch by 1925 (see the WOSL's magazine Carry On,